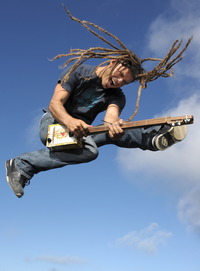 We have just got back from the excellent Ash Grunwald gig in El Arish. It’s only a community hall but I prefer smaller venues. The hall reminded me of the atmosphere in the Marquee in Wardour Street but without the layer of sticky beer on the floor. The gig was the first show on Ash’s latest Australian tour and we had a great night out.

To be honest, neither of us had heard of Ash until a couple of weeks ago when Lisa caught Walking on Triple J radio whilst driving home. When we realised that he was playing locally we just had to buy some tickets. Good live music around here is rare.

Ash’s band consisted of himself (duh) and Benny Owens, Kanchana Karunaratna, and Fingers Malone on assorted percussion, keyboards, decks and obscure second hand electronics & household objects. Ash’s bluesy and very heavy guitar work underpinned by two drummers, a percussionist and a stompbox really had the hall floor bouncing. This is a quality band so go and see them.