It was humid yesterday so we did the usual thing and escaped inland to the Atherton Tablelands for some relief. You wouldn’t believe how enjoyable a couple of hours sitting in an air-conditioned car can be on a humid day in the Wet Tropics. Environmentally unfriendly? Yes but some days can be unbearably humid so needs must, etc.. We packed the photo gear and headed off.

As always, the thumbnail images here link to 1280×851 pixel versions so feel free to grab any photos that you may like.

Up on the Tablelands it was almost chilly so the air-con was turned off, the windows wound down and we basked in the loveliness of free dry air. It can be difficult for people from chillier climes to understand the pleasure of being cold but if one lives somewhere that rarely drops below 20C with sauna-like humidity it’s up there with a good curry and Earl Grey tea on the scale of sheer delight.

So what about the monsters and ghosts? Read on… First stop was the Tchupala and Wallacha Falls. These are on the Palmerston Highway in Palmerston section of Wooroonooran National Park. We stopped because it was the first time we had noticed the signage for them. A small parking area for a couple of cars leads to the usual path hacked through the rainforest.

After a minute’s walk the path splits into two and it’s 360m to Tchupala and 500m to Wallacha Falls. We headed to the former along the narrow path which was cut into the side of the ravine containing the river. Signs of recent cassowary presence was reassuring from an conservation viewpoint but slightly worrying in that retreating from an angry cassowary wasn’t going to be easy. 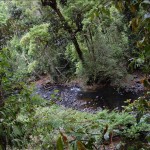 The trail wound down and occasionally afforded a view down to the river below. Much of far north Queensland looked like this before it was cleared for timber back in the 19th and early 20th centuries. Luckily for us, the loggers couldn’t be bothered with some of the steeper slopes. Rainforest has to be experienced first-hand to be able to appreciate it fully.

The Tchupala Falls aren’t huge but still quite attractive. This isn’t a particularly good time of year to see waterfalls as we’re at the end of the dry season and the rate of flow is much greater when the wet season has started. I think these falls will get another visit early in the new year.

The last part of the track used to have some concrete steps and railings to take visitors down to a lower viewpoint but these were damaged during Cyclone Larry and haven’t been repaired by National Parks yet.

To add a bit of adrenaline to the day, Lisa almost stood on a snake that scuttled off into the bush. I’m not sure who was the most scared surprised. Between that and the overly agressive March flies we decided to give Wallacha Falls a miss this time. 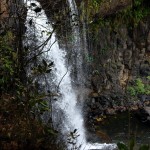 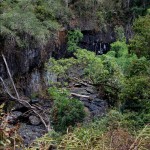 There are a few waterfalls we still haven’t seen yet so we turned on to the Millaa Millaa to Ravenshoe road and looked for the signs to Souita and Pepina Falls. Not the largest or most spectacular waterfalls in the region but size isn’t everything, as Lisa keeps telling me.

The first sign was for Pepina Falls which are right next to the road. A 90m walk takes you from the car parking area to the base of the falls via some typically iffy steps through the forest.

The falls are small but very pretty and there is easy access to both top as well as the bottom. The viewing area at the bottom is a bit overgrown so you get foreground interest whether you want it or not. 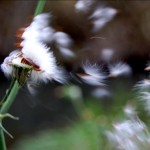 The area above the falls provides plenty of opportunity to use a tripod and get very close to the water for some long exposure photographs. Yes, it’s a cliché but I don’t care because sometimes clichés just work.

Lisa practised her tripod skills and took a great shot of a dandelion-type of flower loosing its seeds. Totally faked, of course, as she had to flick it to release the seeds but a very pretty photograph all the same. We really need two cameras for these photo trips and it would avoid the obligatory “it’s my turn now” discussions. On the way to Souita Falls a cat ran across the road in front of us and attempted to climb up a landslip at the side of the road. He looked in good condition and too healthy to be a feral cat.

He was certainly well camouflaged for the area. Lisa commented that cats with markings that distinct usually cost a lot of money but there wasn’t a house within a couple of kilometres of where we saw him. I don’t think catching him and taking him home would have been a particularly intelligent idea…not without some kind of head-to-toe kevlar suit. 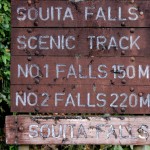 Souita Falls are not the easiest of things to find. They’re at the end of a dead-end road and some one has removed the sign from the main road. A couple of kilometres drive will take you to a sign pointing the way to the falls via a short walk. 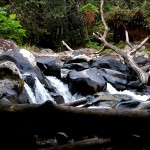 The track isn’t too steep or winding and it doesn’t take long to get down to river level above the falls. The condition isn’t wonderful at this point so care should be taken. Even the tripod had trouble staying upright on the wet, moss-covered rocks at the river’s edge.

It’s only a few metres from here to the first part of the falls and there is a look-out point with steel rails that enables a limited look over the edge. Given the lack of rainfall over the winter months and resulting water flow there’s no raging torrent currently but it’s easy to imagine what it would be like at the height of the wet season. 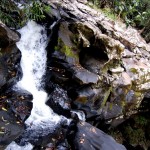 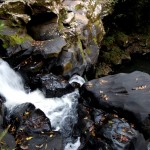 At this point things got decidedly weird. We started the short walk from the first falls to the second and found the trail had been washed away. The ground was crumbling and slippery and the gap was criss-crossed with exposed tree roots so I gently eased my way across using the tripod for support. Then Lisa started to cross, clutching tight to a sapling. Then we both heard it.

“It” was a deep growling sound from just a couple of metres away. The forest here is so dense that it was impossible to see anything that may have been making such a scary noise. This part of Queensland is rife with feral pigs and they are not the friendliest of creatures. A big male can often weigh up 100kg and exceptional animals can reach 260kg. Lisa and I looked at each other and I suggested that we turned back as it was no place to meet anything that sounded so big and pissy. No time for gentle crossing of gaps this time; I just jumped across and hoped that I didn’t slip and slide down into the river so 10 or 15 metres below. We hurried back up the trail with me leading and Lisa just behind.

And then it got even weirder.

Just before I came out of the forest and into the open where the car was parked I heard a deep rumbling sound. Not a growl or a cassowary’s booming sound but a deep rumble of the kind you hear in films when a herd of something is stampeding. Lisa came out a second or two after me and asked if I had heard it. I said yes and said I couldn’t figure out what it was that would make a sound that deep and I was expecting a bunch of pigs to come bursting out of the trees any moment. No, she said, she could hear children.

She heard what she described as some kids laughing and giggling and in a somewhat eerie manner but hadn’t heard the rumbling sound at all. We were only a couple of metres apart and heard very different things. The track only leads to the road and it was clear in all directions. There were no other vehicles parked there either. Apart from us it was deserted.

Now I should make it clear that we are both very rational adults and don’t believe in ghosts, gods or any other supernatural phenomena. That didn’t stop us throwing the camera gear into the car and leaving in a hurry. It was just plain spooky.

When we got home we searched the ‘Net for anything untoward that had happened at Souita Falls and couldn’t find any drownings, murders, kidnaps or people being eaten by feral pigs. Nothing at all… except this.

The journey home was pretty uneventful apart from a beautiful sunset and a cane field on fire. 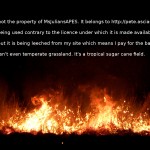