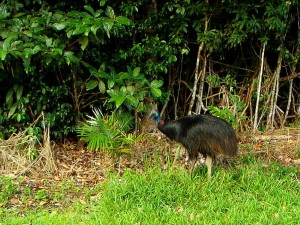 Cassowary in the rainforest

The Australian Rainforest Foundation (ARF) says land purchases will not be a priority in a project to re-establish cassowary habitat corridors between Cardwell and Cooktown in far north Queensland.

ARF chairman Warren Entsch has returned from a fundraising trip to the United States and United Kingdom.

He says the foundation has mapped the corridors and most can be created on land no longer used for farming.

Mr Entsch says there is a lot of concern about the future of the endangered birds in the United Kingdom.

Read the rest of the story at the ABC site.