NBNCo, the company that is building Australia’s National Broadband Network, is holding public meetings in selected rural areas to explain how wireless NBN will work. I attended the meeting in Wangan today with a list of questions. The staff were friendly and helpful although understandably they couldn’t answer everything. Some of my questions are pertinent only to areas that are affected by tropical cyclones, especially Silkwood. Silkwood sees a major cyclone on average once every 11 years. The rest of the answers probably apply to any rural wireless NBN users. I’ve added comments where appropriate.

Why no fibre in Silkwood?

97% of the population live in places that will get fibre. Silkwood isn’t one of these places despite being within spitting distance of the Bruce Highway where the main east coast fibre already runs.

In terms of speed, the planned 25 Mb/s down and 5 Mb/s up doesn’t seem too shabby. 25/5 is a considerable improvement on the 8/0.35 that we have now. It’s probably enough for us for now and in the medium term despite us being quite heavy Internet users. If and when ultra high definition television arrives in Australia it won’t be enough although Ericsson, who will be providing the hardware for wireless NBN, have already completed trials showing 100/100 capability.

Who provides the main transit fibre to NBNCo along the QLD coast?

When will NBN-owned fibre be installed along Bruce Highway?

NBN will install their own fibre where another supplier isn’t already available.

Where will local towers be?

There will be towers at Wangan, Cowley and Silkwood. Wangan will be fed by fibre from the main transit route along the Bruce Highway and the wireless signal will be broadcast from there to Cowley Beach and then on to Silkwood.

The towers will be 30m tall and the colour will vary depending on location. Galvanised steel for open sky areas. Dark green for those with a mountain backdrop.

The Silkwood tower will be in cane fields half way between the two halves of Silkwood and about 500m to the west.

I asked if that means Silkwood would lose connectivity if Cowley or Wangan fail. It would. The staff were unsure but thought “there may be a dish” as back up. 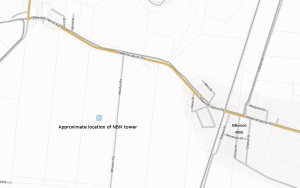 I would like more reassurance on this one. Silkwood is in the wet tropics and half the year isn’t known as the wet season without good reason. Satellite and digital terrestrial television can fail badly during heavy rain.

Either or both. Refilling the generators with diesel will be carried out by contractors from outside the area.

The Telstra exchange in Silkwood survived Cyclone Yasi. The back up generator kicked in when mains power failed and gave us a working landline and Internet for a day. Then the generator ran out of diesel. I’m told by others that Telstra used to give a supply of diesel and a key to the generator to a trusted local but that practice was discontinued a few years ago. If the NBN wireless service is relying on a contractor from outside the area to come and top up the diesel then it may be a problem when the roads are flooded or blocked by fallen trees.

What about cyclone damage to roofs when the wireless antennae get blown off? Peeling off a strip of roof iron is a big deal to people in cyclone zones.

This is a big issue. If a dish tears off part of a roof the resulting rain damage can be very expensive and even insurance can’t replace items of sentimental value.

How long to reinstall after cyclone? Two years on our roof still leaks and we are in dispute mode with our insurer.

Unsure. This is part of the Service Level Agreement with local contractors.

This really needs to be firmed up. People can’t wait weeks for a working Internet connection after a cyclone.

When does service begin?

You should get 25/5 or close most of the time. Enough capacity has been designed into the network so that all users on one tower will get what they pay for.

Will you be employing DPI as Telstra have recently indicated for their services.

No, that is down to individual ISPs.

Existing Telstra copper in wireless-serviced areas will be able to retained for up to 10 years, assuming Telstra don’t change their mind.

This is a very good thing.

If 25/5 is enough for rural users then why is it not enough for cities?

What latency can we expect? Online gaming performance is important to us.

Can I just plug my existing router into the NBN wall box?

Do I need any special NBN software? Is it open source?